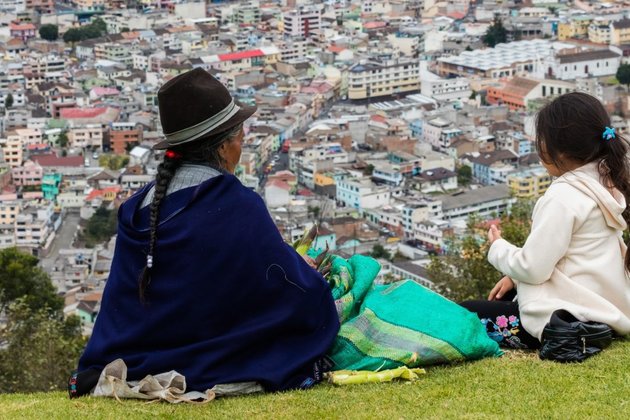 In the midst of the anxiety caused by the dramatic health and socio-economic situation, Ecuadorians will have a new date with the ballot box on 7 February. The more than 13 million registered voters will have to choose a new president and his or her vice-president from among sixteen contenders, along with the composition of the new Legislative Assembly and the representatives to the Andean Parliament.

To win the presidency in the first round, candidates must win more than 40 per cent of the vote and outvote their closest rival by more than ten per cent. Otherwise, the top two will go to a second round on 11 April.

According to all the polls published (if they have any reliability at this stage), the main contest will be between Andres Arauz, the successor candidate of the Citizen Revolution led by Rafael Correa, and banker Guillermo Lasso, supported by Jaime Nebot's Social Christianity. The former prefect of Azuay - elected in 2019 and stepping down in October 2020 in order to run for president - Yaku Perez, representing the indigenist Pachakutik party, would obtain third place with more than 10% of the votes.

Marked beforehand by proscriptions, arbitrariness, quarrels and biased attitudes on the part of the electoral authority, all of which tried to favour the neoliberal candidacy - supported by the economic establishment and the hegemonic media - this election represents a crossroads, fundamentally for the Ecuadorian people, but also for the reconfiguration of the Latin American political map.

Almost twelve years after the coup against Manuel Zelaya in Honduras, the successive illegitimate dismissals of Fernando Lugo and Dilma Rouseff, the right-wing electoral triumphs in the face of the erosion of progressive governments in Uruguay and El Salvador, but also with the recovery of the emancipatory mandate in Mexico, Argentina and more recently with the resounding popular victory in Bolivia, the Latin American political map is still in turbulence, without showing a turn towards a firm trend.

In Chile, after the massive mobilizations of 2019, the citizenry has firmly pronounced itself in favor of removing the straitjacket of the 1980 Pinochet constitution. However, the political errand boys of economic power managed to rig the victory and unite in a single list to support candidates for the Constituent Convention and try to get the necessary one-third to veto any systemic transformation. Even so, Chile remains a hope for change, if the real intention of the people prevails.

In Peru too, in the midst of widespread discontent with the "political class", the possibility of a left-wing, feminist and intercultural triumph is emerging, embodied in the young figure of Veronika Mendoza. Meanwhile, the country continues to be embroiled in an incessant war of mafia gangs vying for the spoils of political power.

The trio of the neoliberal axis in the Andean region is completed by Uribe's mulato leader, Ivan Duque, in a Colombia whose wounds have been reopened after the brief hope of a Peace Accord, which unfortunately was born with a death sentence foretold. Colombia's economic, political and media monopoly and the country's position as the spearhead of US military and conspiratorial strategy in the region pose a major challenge to transformative options such as those of Gustavo Petro, whose Colombia Humana group was recently outlawed in yet another case of blatant lawfare.

Venezuela continues to be a nation under siege, with the United States having failed in its objective of directly overthrowing the constitutional government of President Nicolas Maduro, but having achieved its minimum objective of taking away much of the initial thrust of the Bolivarian revolution as a locomotive of solidarity-based integration and a revolutionary example of the construction of a new socialism with communal characteristics.

In the same way, the right-wing conspiratorial apparatus does not rest and in Cuba it also feeds protests from a small cultural sector that dissents from official policy with the intention of creating massive uprisings that are unlikely today. The island continues to be a beacon of solidarity, national pride and health and educational development, while at the same time trying to undertake substantive economic reforms to improve the purchasing power of its population.

In Brazil, a nation of inescapable weight in the region, conservative forces are pushing for the replacement of a weakened Bolsonaro - like Temer, barely a fuse in the power scheme - by a typical neoliberal character such as the current governor of Sao Paulo, Joao Doria. The groups of the left, feminism, black and indigenous identities, in short, the socially excluded, will have here - as in Colombia - the steep challenge of generating a real popular accumulation of forces behind a transformative political project, especially in the southern region of the country, still marked by the imprint of slave racism.

Given this scenario, a victory for Andres Arauz in Ecuador would strengthen the progressive bloc, in a sure alignment with Andres Manuel Lopez Obrador, Alberto Fernandez and Luis Arce - the latter in turn a bridge with the left-wing ALBA-TCP - which would allow for a partial reconstitution of a sovereign integration front, capable of confronting the colonialist diplomacy of the OAS.

This front, made up of a non-homogeneous social base, although it would not produce a direct break with the matrices of world capitalism, would be in a position to dispute the meanings in the post-pandemic with a character of greater protection for education and public health, the direct distribution of resources to the impoverished sectors, a techno-scientific development of greater autonomy and intra-regional and South-South cooperation and above all would act as a brake on the irrational appetite of multinational capital over the natural reserves and human capacities of the region.

What the mainstream media calls "apathy" or "disinterest" on the part of the majority of the electorate and which is reflected in a high percentage of "undecided" voters in the polls is not such a thing. The appropriate word is disillusionment. The radical shift of Lenin Moreno's government towards the right, the betrayal of the mandate for which he was elected, the obvious alignment pact with US directives and the interests of economic power, with the consequent media defamation, persecution and proscription of Correism, the co-government and sharing with the now candidate Lasso and his ally Nebot, the new dependence on the IMF and finally, the health catastrophe that struck the country, fueled in the population the historic spirit of rebellion that manifested itself in the days of October 2019.

To those historic days, the government and the established power opposed repression and cynicism, waiting for that flame to be extinguished. The social unity of those days in open rebellion against the system did not result, at least not yet, in political unity, since the resentments of yesteryear persist, the protagonisms and also the unresolved contradiction between the national-developmentalist facets - now with Arauz converted into a more environmentally friendly technodevelopmentalism - and the indigenist current more inclined to environmentalist and Buen Vivir proclamations.

How can hope be recovered in times of disillusionment and fragmentation? Times in which generationally diverse dreams coexist, in which irrationalism is gaining ground in the face of the lack of a generalized sense of a reality of materialistic consumption, in which the divisionism of the currents of human progress is being fuelled by conservative power. Above all, in times when the new humanist paradigms of the future fail to establish themselves clearly.

A time for change

The strategy of political persecution and proscription, fostered through the infiltration of the judiciary and permanent media manipulation, but also ageing and death, forced the progressive forces to propose candidates different from the political icons of the beginning of the century. Chavez's departure placed Nicolas Maduro as the highest representative of the Bolivarian revolution, while Miguel Diaz Canel was anointed in Cuba as the first president born after the revolution.

Faced with Lula's illegal imprisonment, the Brazilian left turned to Fernando Haddad (PT), but also to Manuela D'Avila (PCdoB) and Guilherme Boulos (PSOL) as young exponents of a project of political renewal. In Argentina, Kirchnerism forged a front that brought together the whole of Peronism and other sectors of the centre-left and left, achieving victory with the candidacy of Alberto Fernandez. In Bolivia, the coup failed to consolidate and Luis Arce, Evo's former minister, was the figure chosen to represent the social movements and the legacy of the Process of Change.

Even when they do not play a central role in the administration, the historical referents have not lost the weight conferred on them by the people at the time, fulfilling strategic functions in the complex political framework of each country.

In the Ecuadorian case, the hope for a "better return" of the Citizens' Revolution, which achieved important constitutional transformations, an embryonic plurinationality, but above all, great improvements in the standard of living of the majority, is centred on the young figure of Andres Arauz, economist and former Minister of Knowledge and Human Talent in Rafael Correa's government, who will be 36 years old the day before the election.

As he has stated in interviews, he has signalled his intention to undertake reforms that will allow for greater democratisation of communication and will take on the important mission of putting Ecuador back on the path of regional unity destroyed by colonialist pressure from the US government and its regional vassals.

This generational change promises to undertake strong reforms to the country's productive matrix, based on the challenge of raising an impoverished, devastated and once again indebted country through sovereign digital technological development with social justice. The alternative at this juncture is neoliberal and nefarious.